East or West, Android is Best... But that's just me 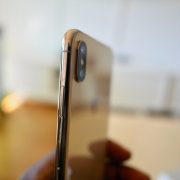 If you are into the "ecosystem" just buy the phone, you don't even need this review

Have you ever made a decision that you immediately regretted? No? How about a 145,000 shillings “mistake”? So, back in January, I felt like a cool kid enough and decided to splash some money on a new phone – since Samsung requested to have their Note9 back, and my device of choice was the iPhone XS Max.

Before you rush to the comments and call me out for “not knowing better”, let me explain myself. My decision to pick up the XS Max was not just because of imaginary clout or that seemingly fancy, ‘via Twitter for iPhone’ tag – Ok, maybe it was but more importantly, it was a meant to be a full-on experience of what it means to be an iPhone user.

I promise not to overdo the music screenshots… pic.twitter.com/O2G36ri36d

I have reviewed iPhones before, but local policy meant I could not keep the device for longer than two weeks so I was still not a full-blown user until this January. Spent a total of three months with the iPhone XS Max before I threw in the towel and here’s my experience as an iPhone user: Know how we say that iPhone users (especially if they are using the latest device) are show-offs? Well, that is because other people make them want to show off. 8 out of 10 times, whenever I went to any public gathering and anyone would notice the slightly bitten apple on the back of my phone, they would either ask for a photo or to generally see it – this is where it is also evident that people are struggling with Apple’s naming scheme.

The iPhone comes with its basket of attention, mostly positive until you meet those people who prefer pieces of land in Kamulu. The attention is a whole feel-good mood that constantly reminds you that you made the right choice, makes you feel elite and sets you up on a pedestal that most dream of being on.

This one needs no explanation. It is well known that iPhones have great cameras and with each iteration, this gets better, especially when it comes to sharing online on Snapchat and Instagram stories. Videos taken on the iPhone also look great and colour reproduction is better than almost all other phones.

Yes, the iPhone is not the best camera in the world, sometimes images would be too dull or portraits would come out funny but the chances of that happening were very low. Below are a few images that I shot on the iPhone XS Max: For that price, I would expect nothing less. This phone is well-built even on parts you would expect some shortcuts, Apple does not make those. For instance, Samsung’s Galaxy S and Note lineup feature a delicate plastic sim card holder while the iPhone has a sturdy metallic one. This kind of quality is spread on the whole phone, like a silent reminder that you are using a premium device.

Being an avid Android user, I was utterly shocked when I would get notified of a pending software update less than two days after Apple announces the seeding of the same. Over at the Android camp, we’re used to waiting for months upon months for updates.

For some reason, this thing lasts! Despite Apple’s traditionally using smaller batteries compared to their Android counterparts, the iPhone XS Max has great battery life that would push a heavy user such as myself throughout the day without the anxiety of running to charge the device. However, if it does get to that, make sure you have your cable with you because what are the chances of finding another iPhone user in this market and also time – make sure you have time because the iPhone XS Max takes forever to charge and that brings me to what I didn’t like.

As much as I praised the fast seeding of software updates, that’s where the goodness ends. For someone like me who is used to customizations and having options upon options, iOS quickly felt blunt and boring. Yes, things work as they should but I want more – I want to add widgets on my home screen, I want to have an app drawer and I want to use third-party apps as my default apps, all things that iOS is pretty bad at and this is where the love fades. We have all heard people claim that Apple’s ecosystem is flawless and to some extent, I agreed with this until I got myself into the mud. The ecosystem works, if you have numerous Apple devices but that wasn’t the case for me, I had this iPhone, an iPad I barely use and that’s it. Moving files from my PC to my phone was a nightmare, I had to get creative with Telegram, something that required more effort than I was willing to give.

And it is not just sharing of files, if you’re not using any of Apple’s other services such as their cloud storage, the iPhone will quickly frustrate you and you will then realize the $1450 mistake you made. In short, if you are going the fruity way, jump in fully, get all the devices.

But it’s not all bad, the resale value on the iPhone is really good compared to Android phones and as much as I said goodbye to the Apple ecosystem, at least I was left with one thing to serve as a reminder of a fling that could have been, Apple Music, it’s the only thing that I carried forward to my current Samsung Galaxy S10+ – No regrets.