Facebook Messenger users in at least 84 countries in Europe, Asia, the MEA region, North and South America were this week hit by a scam campaign, as per a new report. This huge deceitful campaign was detected by digital risk protection (DRP) analysts at Group-IB. This is a Singapore-based threat hunting and adversary-centric cyber intelligence company.

According to the firm, the cybercriminals managed to distribute adverts promoting a supposedly updated version of the Facebook Messenger app. The messages had a link requiring the users to click that was then used to harvest users’ login credentials. Group-IB also confirmed that they have informed Facebook of this large-scale online fraud.

As per a blog post from Group-IB, the analysts discovered nearly 1000 fake Facebook profiles deployed for the scheme. The firm also states that the scam initially came to the light in 2020. This is as the researchers detected traces of the scam in Asia and Europe. “The number of Facebook posts inviting users to install ‘the latest Messenger update’ reached 5,700,” the firm said.

Apparently, these fraudsters got to draw users’ attention by registering accounts with names mimicking the real app. This is from Messanger to Meseenger, Massenger and more. They also used Messenger’s official logo as their profile picture. To facilitate the moderation process in Facebook and bypass its scam filters, the scammers used shortened links. These were created with the help of services like linktr.ee, bit.ly, cutt.us, cutt.ly, and rb.gy. 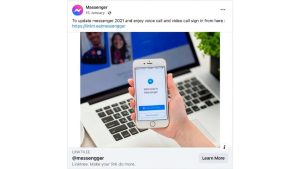 Additionally, they gave users offers in the form of some non-existent features. This includes the ability to find out who visited one’s profile and seeing deleted messages. In some cases, the users were also offered the chance to shift to Gold Messenger. Other scammers went as far as warning users that their accounts would be suspended if they did not sign up on the fake site.

It’s actually astonishing how far scammers will go to find new ways of hacking into accounts and scamming users who aren’t used to these fraudulent schemes. So, be careful when you come across any similar plans.