Months after launching Disappearing Messages, WhatsApp is now working on a similar feature for images. The upcoming feature will allow users to share self-destructing images on the messaging app, which will disappear for both parties after a pre-defined time period.

This upcoming feature was spotted by WABetaInfo whose screenshots were shared as well. 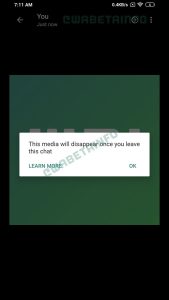 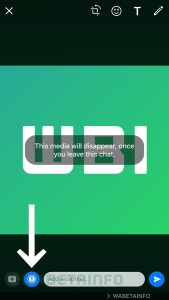 As demonstrated by the images, the feature will add a new toggle next to the text box in the image preview window. Tapping on this toggle will bring up a box that reads, “This media will disappear, once you leave this chat.”

After sharing the image, it will be able to automatically disappear once you leave the chat. Once the recipient opens the image, they will see a notification with the same message.

According to the report, WhatsApp will not allow users to export self-destructing images. However, the Facebook-owned messenger has not included any measures to prevent recipients from taking a screenshot of such an image.

It also won’t alert the sender if the recipient takes a screenshot of the destructing image. Unfortunately, this sort of half-baked implementation will render the feature completely useless.

There is no doubt by now that adding these features only ends up giving users a false sense of privacy and stop them from migrating to other apps.