Last year saw the wake of a new form factor in the smartphone industry beginning with the likes of the Galaxy Fold and Huawei Mate X. And even though foldable phones had already launched before, the design hadn’t really gotten to mainstream levels until 2019. Well, it seems like that wasn’t enough until a whole new design came out in the same year, i.e flip phones. And yes, Lenovo-owned Motorola was first with the launch of the Razr.

Months later, the smartphone surely did turn heads to the point of Samsung following suit with the Galaxy Z Flip that was launched early this year. Besides, there have been reports of more companies working on foldable phones with similar designs. But the Razr hasn’t really been widely distributed around the world like the Z Flip. Lately though, the company has been shipping the phone to other markets including India where it recently launched at KES 180,000 starting price. So what would it be like to own the new Motorola Razr foldable phone?

The phone is designed to pay homage to the fancy 2004 Razr model. The keypad is instead replaced by a small  6.2-inch foldable plastic OLED panel running on Android 9. The general look makes it more compact and pocketable when closed unlike what we have with the like of the Galaxy Fold. The phone wouldn’t however, not be referred to as flagship when it comes to under-the-hood specifications. The phone is powered by a Snapdragon 710 processor. This comes alongside a 6GB RAM together with 128GB internal storage for all your files.

The battery can also be underwhelming since Motorola chose to go with a 2510mAh battery, that pales in comparison to what we have on normal smartphones. Luckily, you can be assured of fast charging thanks to the USB Type-C port.

Your daily photography needs are then catered for by the 16MP camera that is sort of a front and rear-facing camera. Placed at the top half of the phone, you can get to use it when the phone is opened as a rear-facing camera or as a selfie camera when it’s closed with the small external screen for preview. That same screen is also useful for notifications and seeing incoming phone calls just like the old days. Additionally, selfies can also be taken by the 5MP camera located at the display notch. 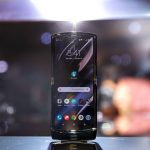 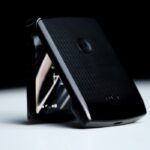 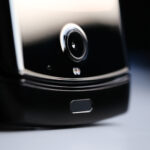 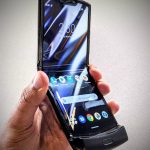 Of course, the core of this form factor is the 6.2-inch 21:9 plastic OLED display. Like the Galaxy Z Flip, the designer never intended it to be dramatically big but also compact enough to offer the same experience you would have with your current regular smartphone.

Thanks to the advanced hinge system, the phone has proven to be quite easy to fold and open with one hand. Obviously, people would worry about the likelihood of a crease in the middle of the screen. Considering it is a plastic layer being opened and closed multiple time, you would get to see a crease after some time, but that shouldn’t really be a major cause for worry.

As of now, the Motorola Razr globally rivals the Samsung Galaxy Z Flip (KES 160,000) that has a slight advantage when it comes to features like memory, battery and cameras. Either way, it would be interesting to see the phone in Kenyan stores now that it has started launching in other countries and regions. Question is, would you buy the Motorola Razr?