Instagram may be one of the major social media platforms that have clearly resolved to make sure each user gets to have as much of an ideal experience as possible, including tackling cyberbullying.

This is proven through the words from company’s head, Adam Mosseri, who firmly stated that he’d rather lose users than allow bullies to thrive. This is considering the never-ending pestilence from online keyboard trojans that tend to give others terrible times through their posts and comments to other users’ posts.

But more to his sentiments, Adam pointed out that instead of banning those offenders or blocking their posts, new tools will be distributed out on the platform in an effort to curb the nuisance.

One of the tools will depend on Artificial Intelligence (AI) to spot offensive comments with the other giving users the privilege to choose who gets to comment on their posts. The latter is especially one tool that Mosseri hopes will help “empower the targets of bullying to stand up for themselves”  as well as “prevent bullying from happening on Instagram”.

The AI-powered Rethink tool will be able to identify and flag comments that are considered offensive even before they are posted. This will then cause a dialogue notification to pop up asking the users “Are you sure you want to post this?” thus giving them the opportunity to reconsider what they are just about to do. This may not be considered as too much of an effective tool but you would be surprised to realise how much people rethink their decisions once asked whether they are really sure about it. According to the company, tests have even shown that the notification asking users to rethink their comment has made ‘some’ to undo their comments and post something “less hurtful” and instead, giving them time to “reflect”. Many may not be absolutely satisfied with “some” but for those whose offensive posts get past the first AI gate, the second tool will then come in handy to provide the targetted users with more power.

According to Mosseri, most cases of online bullying go unreported because the victims are afraid that blocking users will lead to more repercussions like losing even more followers, which is relatable to many to some point. Instagram will then come to the rescue by empowering these users with the tool dubbed Restrict that one can use to block the bullies without them ever knowing. 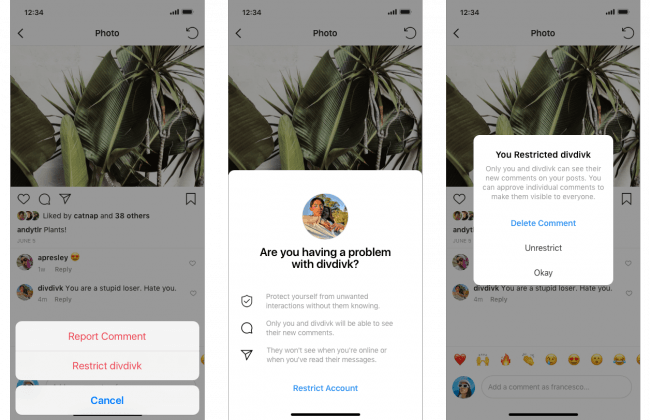 As usual, the restricted users will continue to see posts from their targets but will not be able to see whether the user is online or has read their posts. Moreover, the targeted users will have the ability to review the offensive comments and then decide whether the comment can be seen by everyone else or not by either deleting it or leaving it pending so it’s invisible to the public.

Luckily enough, the targetted users won’t even have to read the comments if they don’t want to as it will be hidden behind a “sensitivity screen” that will require to be tapped in order to see it.

These threads will instead be sent to where the spam is degraded and if the users want to finally see the messages they will first have to unblock the bullies first.