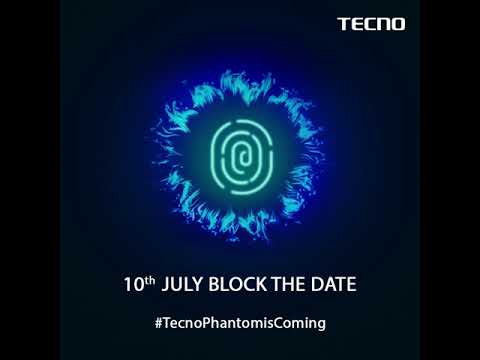 TECNO’s flagship phone has been missing in action for a while now. While we knew that a device under the Phantom-branding existed last year, the phone never made it outside of TECNO’s test labs.

Well, it seems that the company just needed a short break as TECNO India has teased the launch of the next Phantom. In a tweet by one of India’s largest online publications, Gizbot revealed teaser images of the TECNO Phantom that the company had posted on YouTube.

The teaser image contains the date of the launch, July 10 and also features a mock-up of what looks to be an in-display fingerprint scanner. From the image, we can tell that it will probably be an optical scanner, thanks to the animations included on the mockup.

Nothing more is revealed, however, Kenyan tech blog, TechArena, does report that the Phantom will include a triple lens setup on the back – a first for the brand. The three lenses on the back will include a standard lens, a wide-angle lens and a depth sensor – something that we have increasingly seen with devices in this space.

The publication also notes that we should expect to have a water-drop notch and reliable information on our side reveals that the company will call it dot-display, however, we wish they went with a punch-hole instead.

There’s no more information on what technical specifications we should expect but seeing that the device is launching in July, we will not have to wait that long. Also, we don’t know what the next Phantom will be named but our money is on TECNO Phantom 9.

The only thing that we will be on the lookout for will be the pricing.

The mid-range space has increasingly grown competitive, with things made even worse with the recently launched Huawei Y9 Prime (2019) and the Samsung Galaxy A50 (which also features an in-display fingerprint scanner), if company keeps the price of the TECNO Phantom 9 below Kes.30,000 – then we will have an even more exciting launch to look forward to.

Update: TECNO Mobile Kenya confirms that the next phantom will be known as Phantom 9.