Have you ever been sitting by yourself and thought, “Hmm.. how does WhatsApp make money?” If you haven’t, then take into account that you are not paying to download it, not paying for a subscription, there are no ads and there’s no WhatsApp premium.

Now we’re on the same page right? The most popular app in the world with all its services seemingly free. Well let’s take a trip down memory lane and understand why WhatsApp is the way it is today.

History of WhatsApp: It wasn’t a Bed of Roses

In the period between leaving Yahoo and starting WhatsApp, both of them even applied for jobs in Facebook but got rejected. (Never give up)

Following the rejection, WhatsApp was born in January 2009. This is after the founders purchased an iPhone & realized that the app industry was an untapped market poised to grow.
Believe it or not, When the first version of WhatsApp was launched, it wasn’t even a messaging app.

All users could do was update their statuses, which could be seen by other people in their network. Soon after, Apple began pushing these notifications prompting the app to venture into an instant messaging app.

The platform soon grew to over 500,000 users and now investors were interested. However the team was resistant as they were not looking to have ads on their app.

Here is their quote:

“At WhatsApp, our engineers spend all their time fixing bugs, adding new features and ironing out all the little intricacies in our task of bringing rich, affordable, reliable messaging to every phone in the world. That’s our product and that’s our passion. Your data isn’t even in the picture. We are simply not interested in any of it.”

How WhatsApp Made Money Then

In 2013, WhatsApp had what we call a Freemium subscription. Here users would get to access the app for free but would be charged about KES 100 a year. However, many users never paid a shilling to use WhatsApp. This is because the service got renewed automatically after their free period ended.

Up until Facebook came in, WhatsApp was still a freemium subscription service. That was until 2016 when the company made the app free for all and promising nothing would change. Emphasizing the fact that there would be no ads.

They also included end to end encryption whereby not even WhatsApp could read your messages. In all this however, Facebook was still looking to monetize the app and cash out on user data.

When Zuckerberg bought WhatsApp, he made a promise to the founders that there would be no pressure to have ads nor monetize the app.

Not surprisingly though, soon after acquisition the push to monetize WhatsApp was heavier than anyone expected and both founders ended up leaving after disagrements with Facebook.

How They Make Money Now 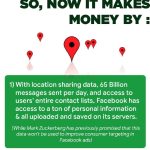 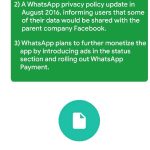 The WhatsApp Business App helps businesses serve customers on WhatsApp, with provisions to create product catalogues as well as provide customer support.While the Business App is free to use, WhatsApp monetizes the service through the WhatsApp for Business API.

By charging registered businesses for slow replies. Businesses are allowed to respond to messages from users for free for up to 24 hours but are charged a fee per message for delayed responses, which varies by country.

There’s also the fact that Facebook uses your WhatsApp data to better customize ads on its other platforms for you. This information is very expensive thus could be the main source of income. Yet to be proven*

Looking to the Future

According to Facebook, Fortunately or unfortunately, depending on your standpoint, ads will soon be integrated to WhatsApp Statuses and you might not have a say in the matter.

There are also notions of WhatsApp Pay being a feature soon to come to the platform.

“One example we’ve been working on is WhatsApp Payments. You’ll be able to send money as quickly and easily as sending a photo.” Mark Zuckerberg