Choosing budget phones can be hectic. Considering how close their price points usually are, most people tend to bundle them as the same. But you might be shocked to find how different they actually are if you paid attention to the really fine details.

In this article, we pit the Infinix S5 against the TECNO Camon 12 Air. The two phones are similar in so many ways. Even for the differences, there is a really small margin but considering they are from two totally different brands, there will always be that one which sets itself apart.

So, here’s a list of specifications comparing the two devices with the differences highlighted in bold:

When it comes to design, you will still be lost as you were before. The two phones look pretty much identical with both of them using the same chassis and just about the same size. If not for the branding, one would confuse them when presented.

The display for Infinix S5 is slightly bigger than Camon 12 Air’s even though it would take an actual expert to tell them apart. When it comes to resolution, both of them give out the same 720p, which sucks but for the price points, you would understand why. It’s not as disappointing though as they are pretty bright equally with pixelation being just about average. The difference may be seen however in performance all given by the difference in memory. The processors are pretty much the same although the difference comes to software. On top of Android 9, they use their exclusive skins, TECNO using HiOS and Infinix S5 coming in with XOS. One may argue that TECNO is better even though it is still up for debate.

However, it is fair to give it to Infinix S5 for the 64MP selfie camera compared to the 32GB camera from TECNO Camon 12 Air. Of course, you will see the difference in images shot on both. TECNO’s may be bright and colourful but if you want fine detail in your selfies, the S5 would be ideal. 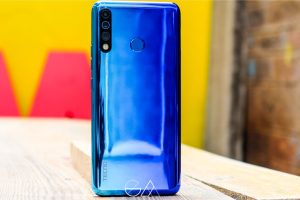 If you are one to store huge files on your phone, Infinix S5 still dominates with 64GB that is double what Camon 12 Air brings. This might be a huge blow for any TECNO fans that expected to win in so many ways.

The battle between these phones is quite phones. With all these similarities, one would wonder why they even belong to two different brands. But you have to choose in the end, so which one do you go for? Infinix S5 impresses when it comes to hardware; good storage, good selfie camera, extra sensor. TECNO Camon 12 Air, on the other hand, impresses when it comes to software and performance. With better RAM and HiOS, you do not get a hard time operating apps on a daily basis.