Telegram is one of those messaging platforms that Twitter would say went to private school while the rest got public education.

The platform has been at the forefront of developing new features that users have long enjoyed with some calling WhatsApp to emulate. Now, Telegram is at it again, this time around with a series of updates that the platform says are meant to bring peace of mind to users.

Top of the list, is a new feature known as slow mode. This feature is meant to invoke some control in a group that can easily get rowdy or out of control with a specific person or persons being a nuisance with multiple messages.

Previously, it was possible for a group admin to mute an individual member for a specific period which prevented the member from sending anything in the group, however, they were able to see new conversations. With slow mode, the group admin can now set a time interval after which the specific member is allowed to send a message in the group. 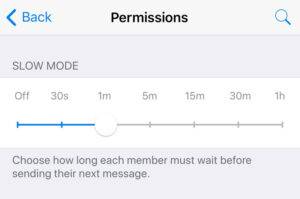 This means that the member who has been put under restriction can only send one message per intervals of either 30 seconds, a minute, 5 minutes, 15 minutes, 30 minutes or an hour. Telegram says that this is meant to make “groups more orderly while raising the value of each individual message.”

Another cool feature introduced in this update is silent message delivery. No, this does not mean you put specific messages on silent as the receiver but its an option that allows the sender to push a message to you without you getting a loud notification.

This is simply done by holding the send button before sending out the message and it will be delivered without a sound. “Your recipient will get a notification as usual, but their phone won’t make a sound – even if they forgot to enable the Do Not Disturb mode,” reads Telegram’s description.

The feature also works in groups, a scenario where I see it work much better as opposed to one on one chats.

Admin Titles –  Group admins can now hold customized titles depending on their roles in the group. This can be useful in serious groups where it’s nice to label people with their roles such as a secretary, chairman, treasurer, etc but is still useful in scenarios where things aren’t so serious and admins can hold titles like “Noise maker”, “Slay queen/king” and others.

Video Timestamps – sharing a specific part of a video has been made easier. Now, Telegram users can add a timestamp as part of the caption and recipients can tap on this timestamp to skip to that specific moment in the video and it also works for YouTube videos.

Animated Emoji – There’s already animated stickers that Telegram recently introduced, Animated Emoji work in a similar way but instead of changing the character, the emoji remains the traditional emoji users are used to, only that it’s now animated. The list of animated emojis is currently limited and only includes:

. Interestingly, tapping on each emoji will replay the animation and even more cool, the hear emoji vibrates your phone thus feeling like a real heartbeat.

These new features are available on Telegram’s latest update on both Android and iOS, so go ahead and update the app from your respective app store.