Mobile banking in Kenya is reportedly slowing down as more Kenyans continue to rely on loan apps for daily upkeep. This is mostly owed to the low employment and high cost of living in the country.

According to a new report by an Egyptian investment bank, EFG Hermes, there has been a surge in the use of mobile lending apps for years. This is of course as Kenyans seek to supplement their incomes following a spiral in the cost of living.

This has then been dimmed as a highly possible threat to mobile banking that had revolutionised the Kenyan economy for the last ten years or so. As much as mobile banking and digital loan apps started launching mainly in 2016, the report states that the readily accessible credit services have not been matched with job creation.

As a result, these apps and services continue to take advantage of the cost of living pressures, raising their interest rates to shocking levels.

In the end, Kenyans are then found in a dilemma where they have debts way bigger than what they can actually afford.

According to the bank, Kenyans’ appetite for credit grows relatively to their income, ranging from KES9,130 to KES90,899 per month. The more they earn, the more they get to borrow instead of just depending on their salaries.

As of now, the loan apps are about 100 in number, according to Financial Sector Deepening report released on 29th November 2019 as well as the Central Bank of Kenya.

Why Do Kenyans Borrow So Much?

Lately, there have been increasing concerns over the excessive use of these loan services with many being left in debts they cannot pay. This was even followed by a promise from the CBK to regulate these apps. It is mainly because they seem to “impoverish the users as their disposable income decline, eveny=tually slowing down the growth of these innovations.”

“Given that they are borrowing only Sh500 ($5) or less for one month, we question why they have to pay 15 per cent per month at Branch or Tala for example”. 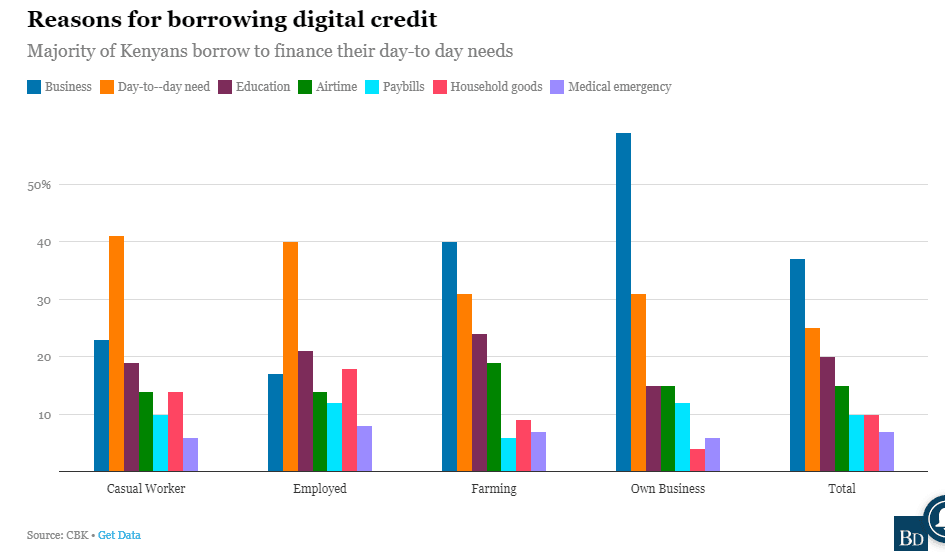 As seen on the report, a majority number of Kenyans are actually borrowing mainly for daily upkeep, a factor that is useful but does not necessarily assure any future returns. Only the business people and farmers who know what they get in return seem to be borrowing these loans for capital.

The total cost of credit(TCC), however, does not seem to favour any of them as they have been registered as very high, with the lowest rate for a loan from one of the apps being 352% annually.

Apps like Branch and Tala charge 15% in a month, with others like Dolax, and Upazi going as high as 45% per month. Let’s not even talk about the M-PESA Fuliza that charges 3% per day. The accessibility to credit was even taken a notch higher when we saw the launch of mobile banking loans like M-Shwari, KCB M-PESA and Eazzy Loan by Equity Bank. But these ones came with nominal rates of 8%, 4% and 6% per month respectively which is pretty decent.

But considering how long it takes for one to get a loan from them, you would understand why many would run for the loan apps that just offer readily available credit.