The Finland-based smartphone manufacturer is still making its way back to the game with the various phone line-ups that have been emerging for a couple of years now. 2019, in particular, had been a really interesting year for Nokia with the various models from budget to mid-range segments. Moreover, the Nokia 9 PureView snatched the light with all the peculiar features that came with it dimming it as a first “flagship” phone from HMD, even though it really wasn’t.

The later part of this year then saw the extension of the Nokia 7 line-up with the release of the 7.2 that we have been reviewing for a while now. And I have to say that has to got to be one of if not the most polarising pieces so far. The phone does have its perks but it’s one whose faults you can’t seem but be irritated by.

Say what you want but HMD Global are proving themselves to be one of the best smartphone designers out there. They may not be even close to the best yet but the smartphones we have reviewed especially last year all had a really nice appeal all thanks to the plush designs. Well, Nokia 7.2 serves as no exception. Following in the footsteps of its predecessors, the design is quite subtle yet impressive with the matte finish from the edges all the way to the back. The rounded corners, the frosted glass cover all serve as a reminder that Nokia is here to stay. The edges come with three buttons; the volume and glowing power button at the right and the annoying Google Assistant button at the left alongside the SIM cardholder. The back, however, comes different this time with the camera module being a protruded black circle that houses four three optical lenses and the flashlight. We initially thought we would hate it but the module’s size is actually not as distracting as one would think. Of course below that is the branding and a reminder of the life-long partnership with Google’s Android One programme.

But the general look is as pleasing as it can ever be and even holding it makes you feel important, somehow.

The phone comes with four cameras, including the front-facing camera. But the main focus, of course, is the rear triple camera system that includes a 48MP main camera, 8MP Wide angle lens and 5MP depth sensor. But after all that, you wouldn’t help but as why they chose to leave out a telephoto lens. Nevertheless, the system does provide an upgrade from what the Nokia 7.1 brags about. The camera app obviously comes the same as every other Nokia phone with a few tweaks here and there but what is to be addressed is the image quality.

Daylight image quality out of the phone’s main cam is good but not spectacular, The detail in the photos is decent but with its fair share of noise. Colours are not as off but there is a special green tint that comes to it that may disappoint some. Nature photos would be absolutely great to take with the camera though as the greens to pop a lot more.

Most would be pleased with the wide-angle lens as it is something that missed even from the Nokia 9 PureView unit. With a magenta cast colour this time, the greenery from the main does not shy off either with this lens. It captures okay detail as far as these cams go, but does so with a particularly grainy rendition of noise, and there’s a lot of it too.

Portraits on the Nokia 7.2 generally come out with good subject isolation, decently so even with fairly complex subjects. Perhaps you’ll want to tone down the blur from the default 5/10 strength as it does come off as a bit excessive. The Nokia is also not too keen to bias the exposure towards getting your subject’s mug right, so high-contrast/backlit scenes will be tricky. 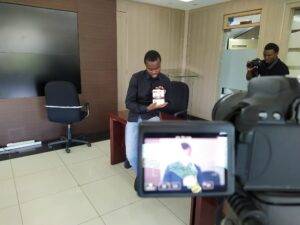 Additionally, the 20MP selfie camera outputs 5MP images by default. It may be a bit low, but still plenty for social media purposes. The photos have slightly muted colours and modest dynamic range, but after our experience with the main cameras, the selfies seem decent.

The 20MP quality does offer an increase in fine detail when there’s good lighting, though it’s less beneficial in dimmer conditions.

Overall, the optics are sufficient enough for any casual photographer. But we can all pretty much agree that we have seen better with rival brands at the same price range.

The 6.3-inch 1080p LCD panel comes in a 19:9 aspect ratio, whose math could work out to a nice 400ppi. Placing the pixel density into consideration, you obviously wouldn’t even refer to the display as bad at all. But what irritated the most is the auto-brightness. A feature that was meant to make it easier to use the phone in any given environment became one of the biggest things that I hated the most about the phone.

In a brightly lit place, the display lights up way too much to the point of discolouring everything. Blacks turn out to become grey, blues turn out to be white, to a real point of irritation. This is most noticeable especially when are using the dark mode, which most apps are apparently moving towards. It could be a hardware or most probably a software issue, but it’s definitely one of the downsides about the display. The resolution itself is decent but I also wish it was way better. However, watching movies, browsing and gaming is still a fair experience on such a display.

All this runs totally opposite from the phone’s general performance. thanks to the Snapdragon 660 octa-core processor alongside a 6GB RAM, the 7.2 runs pretty well from one app to another. Of course, it’s not flagship level but in no way do you experience apps lagging, be it social media, games or media players. For storage, though you do get a whopping 128GB, which is more than sufficient for your large apps and files.

The Nokia 7.2 is powered by a 3500mAh battery, which is an upgrade from its predecessor’s 3060mAh cell. But considering its meant to power a larger screen, the size is just so disappointing for a phone of its price. Normal light usage does not even get through a day. Don’t even get me started on heavy usage like playing games or watching videos. By now, Nokia should already figure out that a good battery is definitely something that wins consumers’ hearts over. No one would want a phone that takes you to charge two to three times a day. So on, power, the Nokia 7.2 is an absolute failure. With the USB-C port, however, it is definitely that juices up in less than an hour, which is relatively fast.

Nokia 7.2 is a good phone but it’s not special. And for Kes.31,000, one would normally expect features that are at least impressive let alone mind-blowing. Of course, the phone is stable enough in terms of design and all but I think the problems that we encountered may overshadow the advantages that come with it. However, if you are a Nokia enthusiast, you will have to choose whether to get the phone or not.

The Nokia 7.2 comes out a normally good phone. But one would wish it came out better considering its price.